So we were driving to the start point - which as one would expect is the end point from yesterday - this morning on the Run route when we came upon the dreaded orange road crew signs. Then the most dreaded of all signs appeared - the Flagman Ahead sign - which often indicates a pilot car. Nnnnnnnnoooooooooooo I screamed inside my head due to the unexpected road issues on day 2. The crisis was averted as Karen and Heidi talked to the crew and the runners were allowed to safely transit the zone of shoulder weed maintenance. As an aside, I thought the crew was performing quality work.
The weather was no surprise as we had light rain and drizzle for a couple hours followed by a nice overcast low 60s temperature today. And the finish order of the day was also no surprise as it was the same as day one. Similarly the scenery was also not a surprise as the world was green around us all day as the route took us by foothills at first to the west of us and then to the north of the route. Everyone enjoyed the scenery once again. Nice low traffic roads for most of the day before finishing up with five miles of a high traffic volume highway. I enjoyed plenty of blissful silence broken up by birds chirping rather than What was a surprise is the song that went through my head all day - Tommy Tutone's 867-5309/Jenny. I must have heard it on the classic rock station as we waited for Marty to finish on Wednesday as the song that plays in my head is usually the last song I hear.
Not all was was super today as Marty is having knee issues which have slowed him. May his knee feel better on Friday.

Some Pictures from Stage One: 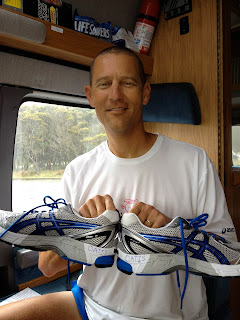 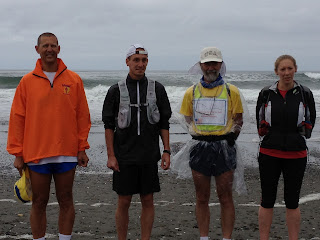 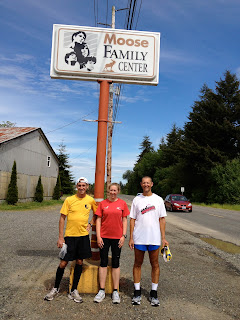 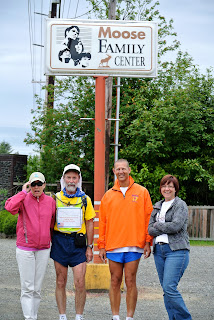 Some of the Pictures from Stage Two: 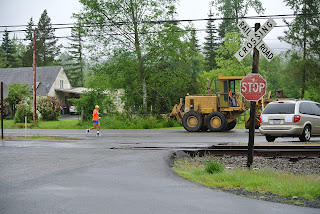 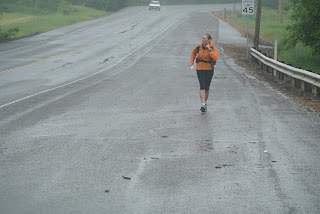 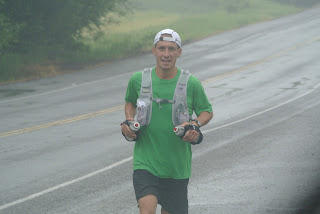 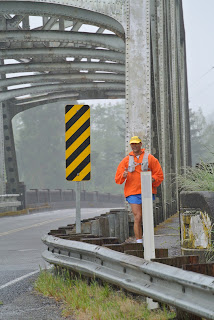 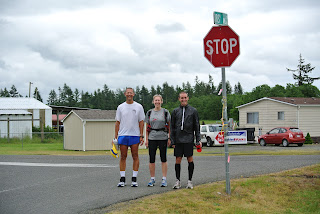 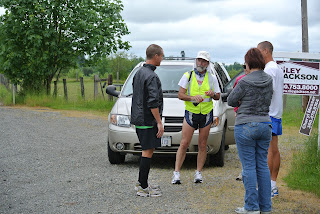 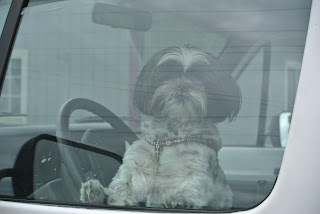 Third Day off to a Gray Start

Runners are off and heading to their first trail today with sadness as Marty decides to drop from the run physically, but not in spirit. 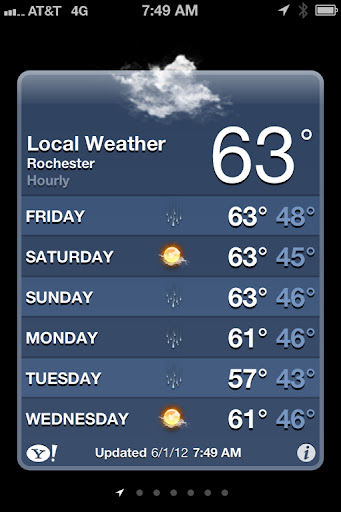 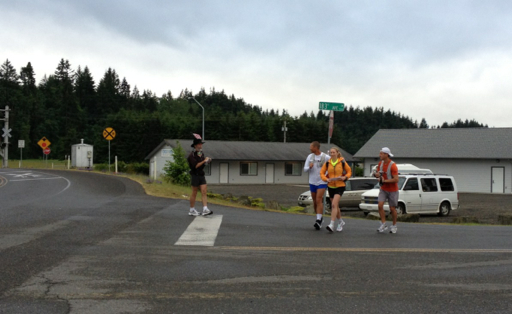 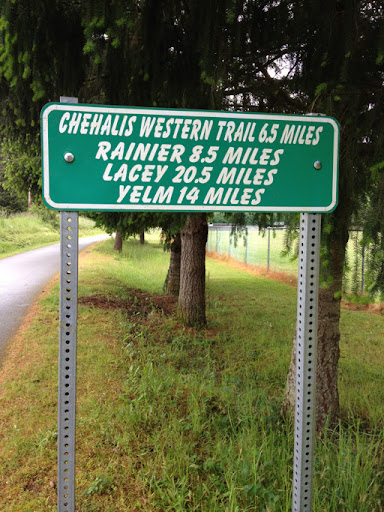 Day Two Starts with a Shower

Day Two is off to a wet start. Everyone in good spirits and feeling well. 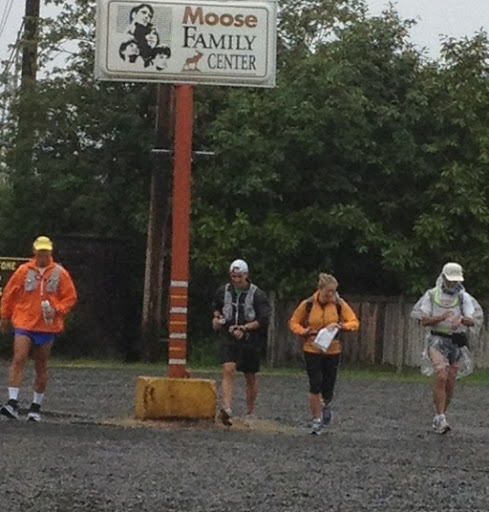 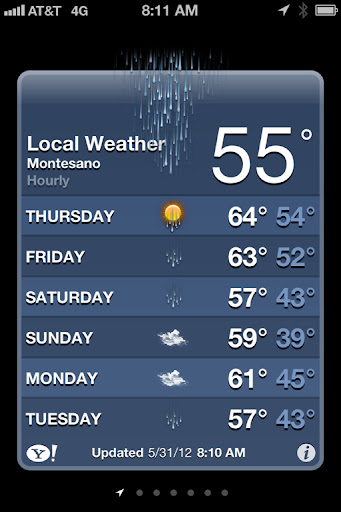 Every runner has a different motivation for running across the country. The genesis of my desire to run across the United States dates back to 2002. As I wrote in an article published in the April 2005 issue of Ultrarunning magazine, "I couldn't wait to log onto the Internet each day during the summers of 2002 and 2004 to read the latest on the two Run Across America races directed by Alan Firth. Alan's pictures and daily wrap-ups transported this excited reader to the actual race location." May I write half as well as Alan did.
The weather was gray and drizzly as we arrived at the Pacific Ocean for the start. The four starters, Jennifer Bradley, Justin Faulke, Marty Sprengelmeyer, and myself - Mike Samuelson - headed down to the ocean after posing for some pictures. After the customary steps into the ocean we headed to the small hill at the end of the beach to start. John Wallace who does a fantastic job with the USA Crossers Facebook page/group was present to take pictures and video of the start. The only other folks present were family and crew - Corky, Heidi, Karen, and Katy - who did an excellent job of taking care of the runners today. I wasn't there of course, but I thought of the Wright Brothers on that fateful December 17, 1903 for those first flights at the beach near Kitty Hawk, NC.
And we were off at 9:12. Due to the drizzle I wore my bright orange 2011 Arkansas Traveller 100 wind breaker and my bright yellow and blue 2012 Land Between the Lakes running cap - both super races who provide runners great swag. Jennifer and Justin headed out together and before mile four I lost sight of them. Marty was running behind me and I lost sight of him quickly also, but it was good to see his crew Corky when I would run by her. I love gray days and overcast skies so it shouldn't be a surprise to read that I was smiling most of the day. I ran at a comfortable pace for me which is about 12 minutes a mile when stoppage time to meet crew and the occasional walking break is thrown in. ABBAs smash hit Waterloo played in my head most of the day, but the real noise was made by all the passing cars. The surprise of the day was the percentage of cars that moved to the left when driving by to give me a wide berth - even though the shoulder was wide for most of the busy road on today's route. I waved to a number of vehicles that moved over to the left and Justin reported doing the same. When the cars weren't passing by I enjoyed the blissful silence. Washington - the Evergreen State - didn't disappoint with the scenery.
From April 2005, "I dare to dream, along with many others, that I will join the ranks of Trans-America finishers." Only 79 days to go!!!
Scorekeeper reports the below Day 1 finish times:
Justin     4:53:52
Jennifer 5:28:37
Mike     6:07:09
Marty    9:34:00
Note - more pictures coming tomorrow.

Email ThisBlogThis!Share to TwitterShare to FacebookShare to Pinterest
Labels: Stage 1 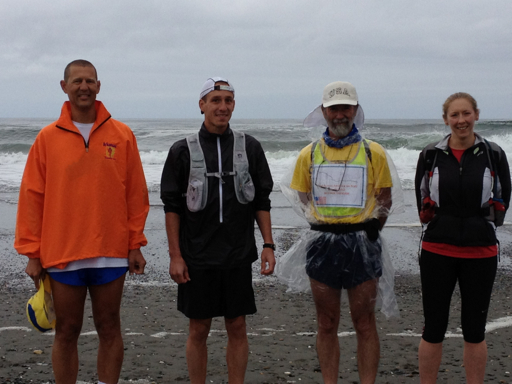 Email ThisBlogThis!Share to TwitterShare to FacebookShare to Pinterest
Labels: Stage 1

THE RAAoT START IS ALMOST HERE!

My dad and I have been on the road for 20 days now. We have been driving the road miles of the Run route, and my dad has crewed for me as I have run and biked the trail miles of the route. Time has flown by as we have been quite busy. The last two days have been on the Cowboy Trail in Nebraska. Kudos to the Nebraska Parks Department for their maintenance of the trail. Some miles of the trail are in perfect condition - a fantastic running surface of crushed stone.
Thanks to Marty and Donna for hosting us for two nights in Davenport. We have also made time to visit with Gator, JR, and friends in PA - great thanks for their hospitality. And it has indeed been a blessing to visit with super Navy buddies Gerry and James in OH and MD.
With maps.google.com and mapmyrun.com it is easier than ever to plan a run route, but first hand knowledge of any route is key. I was pleasantly surprised to see two new sections of the Ohio and Erie Canal Towpath recently completed when we were in Ohio, and three missing segments of the Montour Trail in Pennsylvania have been completed or will be completed before the RAAoT runners reach PA.
Feel free to join us as the runners cross the country - in person, or via the blog, or join us and run the entire distance as there is still time to lace up your shoes and step into the Pacific on May 30th!
Pre-run meeting and dinner is in Elma, WA on Tuesday May 29th at 6:00PM. Send me an email at bp.ultras@hotmail.com if you would like to join us there.
Happy Trails, Mike
PS - Iowa is not flat.
Posted by Ultra Mike at 6:45 PM No comments: