Day 20 started late as we waited for a rancher to move his cattle down the road. We got to run through fresh cow dung on the road for the first 1/2 mile. I was really hoping a passing vehicle wouldn't spray me with any dung while driving by, and I am happy that I can report no dung incidents. 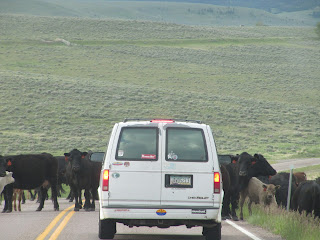 For the 13 hours between finishing stage 19 and starting stage 20 I barely moved the left ankle, and Justin immobilized the ankle with a super tape job to keep the stress of the inflamed tendon to an absolute minimum. Soooooo starting stage 20 was quite a challenge as it was quite painful to get the tape to adjust to a supportive role vice an immobilizing role. The first mile took 21 painful minutes but slowly the tape started to "come around" and I was soon walking 15 minute miles.  I then started to shuffle a number of times for just a few yards each time before quickly resuming a walk. Ugh. The definition of insanity is doing the same thing over and over again and expecting a different result. However, as I neared mile 6 the left foot allowed me to transition from walking to an ugly looking favor-the-left-foot slow jog. Thankfully the ugly jogging morphed to jogging and at mile 22 I was able to run a sub-12 minute mile with little favoring of the left foot!!! I ran well the rest of the day except for the four mile climb at the end of the day up MacDonald Pass - the highest point of the run at 6325 feet (according to the sign) or 6299 feet (according to Wikipedia). Bottom line, MacDonald Pass is the highest elevation of the Run route - so it is literally all downhill from there.
For the second night in a row I went from finishing running, straight to the Roadrunner, straight to a shower, and straight to my bed to rest the ankle with Heidi bringing back pizza and Quiznos to keep me fueled.
Helmville to MacDonald Pass, MT 42.44 miles
Justin      7:12:34
Jennifer   8:30:19
Mike      10:10:49

Day 21 dawned and I needed to make a decision with the left ankle. Have Justin immobilize it again, use KT tape on the ankle, or use KT tape and an ankle brace I last used in the 2006 Western States 100 in which I finished in 29:24. I chose the KT tape and brace so Heidi and I watched the ankle support video and Heidi did a great job of taping my ankle. Once again I started the day quite slowly and a little painfully as the ankle/tendon warmed up. As hoped for it took less time than the day before to transition to a jog and then an outright slow run. I note that the pace wasn't hurt by the fact that the day was almost 100% downhill and there was a good easterly wind to push us. As I approached mile 24 I spotted the dreaded orange "road work ahead" signs. I figured that if Justin or Jennifer had a problem passing through the work zone I would have already heard about it, but one is not past a work zone until one is past the work zone. Thankfully there was no issue as I continued to run on the left shoulder through the nearly three mile work zone. I was quite relieved when I had passed through.
I didn't realize how much downhill running we had done today until finishing and noting that my quads were somewhat sore. The weather was good again, but the heat will get here soon I am sure. Tonight we all went out to eat at the Wood Family Grill in Townsend, MT and enjoyed some fine food. It was nice to not be stuck in bed.
My Aunt Margaret arrived and Justin's brother Adam left us so Heidi and Margaret and Crew Dog Daphne are doing an excellent job of crewing for the three of us now. We look forward to seeing Adam again in IN!!! Thanks Adam!!!
Just like on day 20 Justin and Jennifer were out of sight in seconds at the start. Maybe I will actually be able to see their backs for a couple miles tomorrow - we can hope!
MacDonald Pass to Winston, MT 41.97 miles
Justin     7:10:57
Jennifer  7:56:09
Mike       8:59:06
Posted by Ultra Mike at 8:26 PM

Email ThisBlogThis!Share to TwitterShare to FacebookShare to Pinterest
Labels: stage 20-21